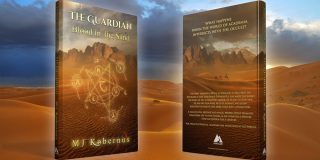 Book Review – Blood in the Sand

An interesting and engaging read by MJ Kobernus

Thought I’d share another book review with you today, concerning a book from a fellow fantasy author called MJ Kobernus. The author, not the book. The book’s called Blood in the Sand, part one of the Guardian saga, published by Nordland Publishing.

Blood in the Sand is an excellent read that I heartily recommend. Set in the modern world (with some dipping into history), this story features magical realism, which is almost always my preferred form. In other words, expect no fireballs or orcs up in here. Instead expect things from real mythology (or indeed, ethnic culture), magic based on real world practises (wicca, tarot, symbolism etc) and generally a subtle supernatural presence. In a nutshell, the aforementioned things are in fact real in this setting, provided you know how to access them. The book also touches on a metaphysical paradigm for explaining them with a modern viewpoint.

But gubbins aside, what you have here is a pleasing, gentle read about historian Philip Entwhistle, his femme fatale rival in academia and the esoteric (whom in my mind’s eye is played by Esmé Bianco, her off of The Magicians and Game of Thrones) and his kindly mentor, about whom I cannot say a lot. Philip is writing a book about his favourite historical figure, an explorer from the 1920s (if memory serves) whose disappearance is an unsolved mystery in the academic community. Our Phil begins uncovering a story that began in the desert and will soon impact his life in untold ways.

The sections of the story which flit back to the past are excellent, describing the desert with poetry without being overwrought. The arrival of various desert peoples from Bedouin to simple villagers provides a lot of interesting dialogue, built on accurate interplays of Muslim hospitality and folk superstition. I’m very wary of giving spoilers about any elements of the story, but suffice to say that it treats certain beliefs and ideas with respect, extrapolating for the sake of fantasy storytelling without hammering Western tropes into them.

Overall, the story is short and sweet, certainly leaving room for more. The next instalment, Blood in the Snow, is in the works right now. I actually felt a little short-changed, but as they say, leave ‘em wanting more. When you’re in the mood for a bit of historical adventure, subtle fantasy and some twists and turns, definitely pick up Blood in the Sand!

Here’s a lovely Amazon link to get you started.