Ekaterina wants to be taken seriously by the men of her village, so she sets out to hunt the greatest prey of all, the legendary Firebird. On the way she encounters three strangers who give her the gifts she needs- for a price.

This short story, inspired by Slavic folklore, is a symbolic tale about the importance of choosing wisely and keeping sight of the things that truly matter. It also now includes three other pieces; British Gods, Thornback and Saturday’s Child!

The Firebird is my first (self) published fiction, a short novella taken from the Strange Matters collection. I initially began writing this story as a joint project with my partner; she gave me the fantasy genre, folklore style and female lead along with other ideas. It grew in the writing to be a lot longer than anticipated, a heavily symbolic tale filled with references to Slavic folklore.

There are existing Firebird tales (similar themes but different in the telling) in Slavic and Russian mythology. I also couldn’t help but slip in some aspects of the principal Slavic gods Perun and Veles and the famous Baba Yaga. The fisherman even tells part of the Slavic storm cycle mythology.

The joke that Ekaterina tells him is a (slightly modified) genuine Eastern European joke!

The boar was a large male with great, gnarled tusks. She considered leaving it be; a beast that big could kill her easily if she failed to kill it outright. Remembering her promise to herself, she hardened her resolve and raised her spear, judging the distance. The boar looked up at her suddenly, perhaps scenting her. Ekaterina threw her spear.

The boar turned to run but the spear still hit, slotting neatly into its back. The beast fell onto its side with a pained cry. Its legs shook for a few moments, then it became still, aside from the laboured rising and falling of its chest.

Congratulating herself, Ekaterina began to climb down. The clean blow would make finishing the boar relatively danger-free. She lowered herself backwards, facing the slope. She climbed slowly, watching for stones made loose or wet by the stream.

Ekaterina was a few feet down when she heard another cry. This was no boar, but a high and beautiful bird’s call. At first it sounded like an eagle, then a crow; she could not tell. The sound washed through her and seized her heart; it was wild and joyful, a cry like a poem.

Twisting to look for the source of the sound, Ekaterina was struck by a sight of such beauty and majesty that she sighed aloud. She could not believe her eyes; the bird above her was like something out of a legend, a tale of the elders brought to life. It could not be compared to any other bird, for it was like all birds at once. She glimpsed a brilliant red blur, feathers that seemed to be aflame, a flickering wash of orange and gold pouring from the bird as it flew overhead.

She stared, held in the thrall of its fantastic beauty… then she fell.

About British Gods:
Two strange figures watch the violence of the London riots unfold and do what they can to help, as only forgotten gods can.
A humble nod to my favourite author, Neil Gaiman. This short story is based on British folklore in the modern-day style of American Gods.

About Thornback:
A poem about the humble hedgehog, seen through my eyes.

About Saturday’s Child:
Henri discovers that his afterlife is going to be even more dangerous than his first life, when he meets a predatory and beautiful stranger.
This very short story is set in the world of ‘Sleepwalkers’, a setting of my own creation. In this case, I give a glimpse of the plight of a newly deceased spirit.

You can find this book on Amazon (pricing is restricted to what they allow) and FREE on Smashwords, with more ebook retailers coming soon- as is the full version with more than four times the content, Strange Matters!

The cover art was provided by Ryan of RSA Artworks, please check out his other work. For a high-res poster, click below. 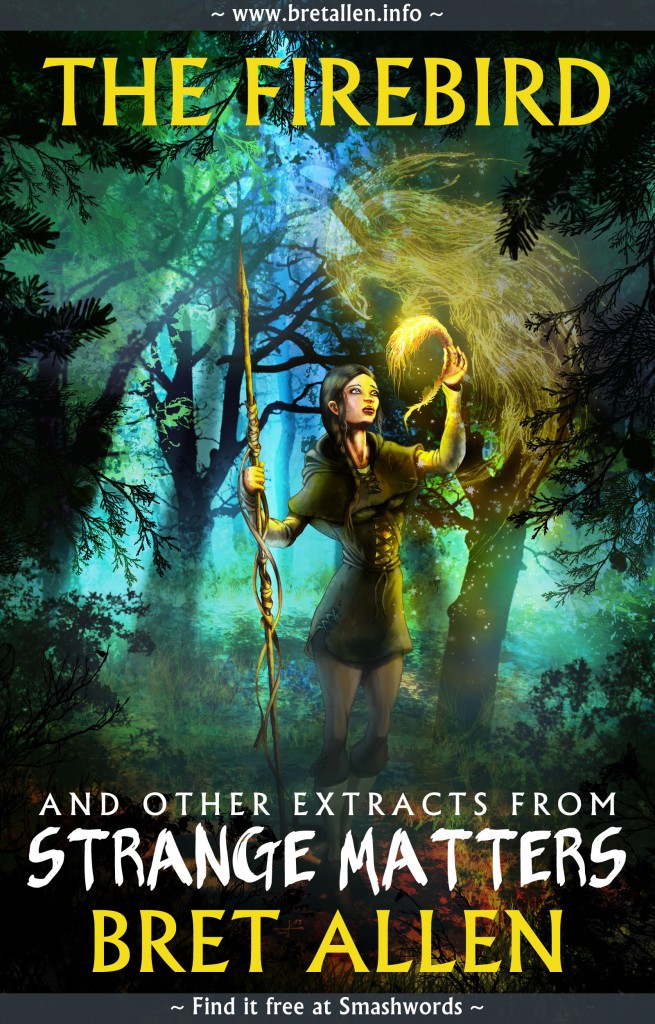 Goodreads reviews for The Firebird