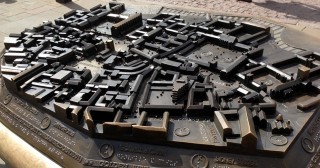 As previously bleated about, I spent the last few days exploring sunny Cambridge with my partner Becki, culminating in a Neil Gaiman signing.

First impression? Damn, that’s a lot of bicycles. In Stoke, bicycles are seen as arcane instruments that are only to be used for ritualistic self-flagellation (exercise). Should one venture onto a road, it becomes a huge nuisance and the target for a game of bump-n-grind (not the nice kind).

I exaggerify, but my point is that it’s really refreshing to see a city where cycle paths are fully implemented. It’s very European and trendy, not to mention good for the people and good for the environs. Bikes have become a totally normal everyday thing, to the point that there are bike rails everywhere you go. Where there aren’t bike rails, people just chain their bikes to regular rails. Failing that, they chain them to lampposts, street signs, shop fronts and each other. I’m fairly sure that it qualifies as some kind of organic urban modern art. 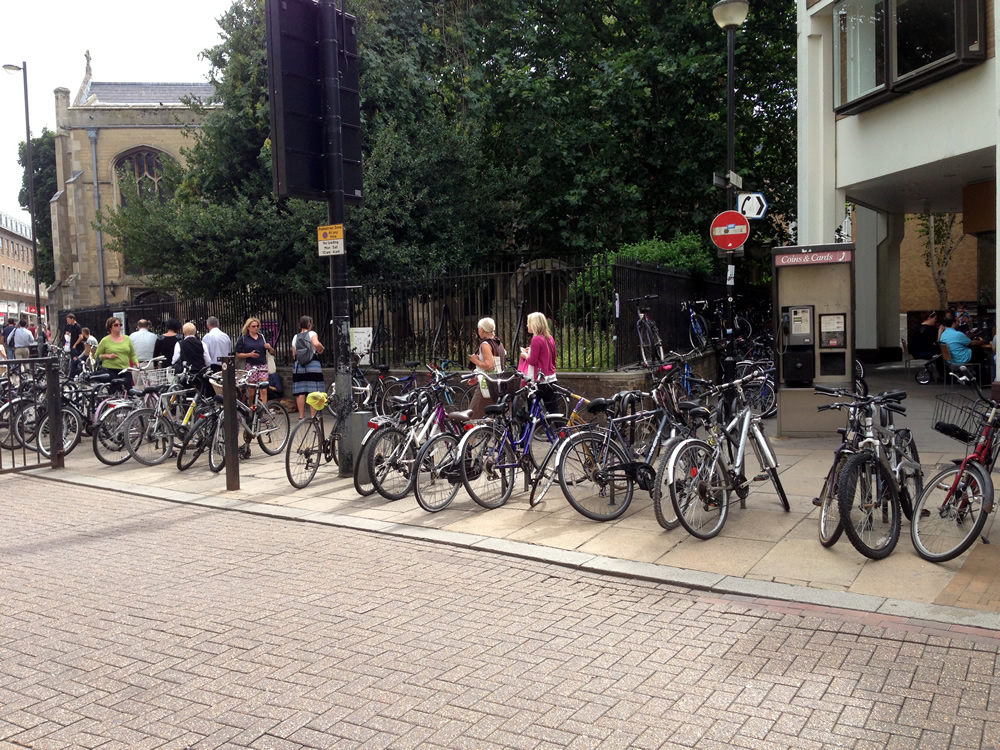 Can you tell how metropolitan Stoke isn’t by how agape I am at the concept of people riding bicycles in the city?

Anyway, the city of Cambridge is lovely. There’s a real melting pot of people, though as you might expect, a lot of them are (to my jealous eyes) posho, scarf-toting Aryan students. Perhaps this is because of the prestigious university that’s everywhere you look in Cambridge. In any case, there were lots of ‘Gap Yahs’ as we began calling them. We should have made Spot the Gap Yah into a drinking game…

The city is, obviously, very old. We toured Saint John’s College, founded 1511, which particularly impressed us. The chapel is particularly nice as is the Bridge of Sighs (so named because of a similarity with the Venetian Bridge of Whispers). The whole place is just so… old and grand! It’s Hogwarts, with rowing instead of Quidditch. It’s really hard to imagine oneself studying and living in such a place. Gap Yah all the way. 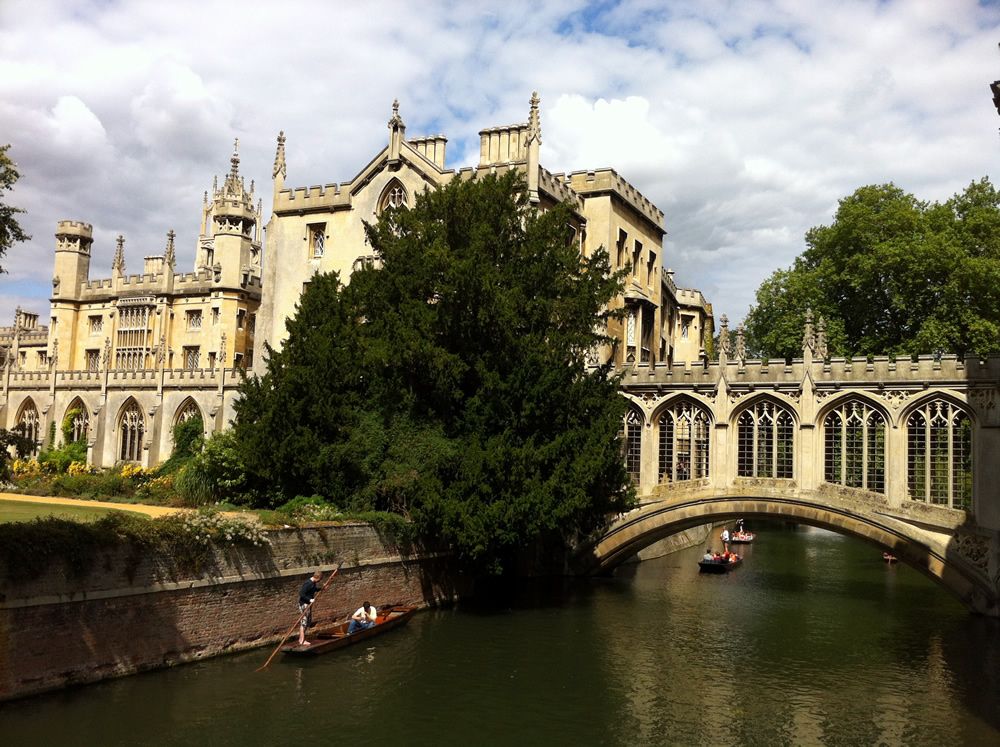 Confession: I had a gap year. But I spent it workin’ fer me bread! Salt of the earth, wotcha, crisp butties. In other words, I was too lazy to do a UCAS application.

Lots of yummy meals and riverside drinks and punt watching later, we went to delightful Ely. Remember my last post? This was that. Nice little town, which is really a city, because of the cathedral! The name means ‘Isle of Eels’. They gots eels, presumably- didn’t see any. There isn’t much isle either, because the marshland that created it has since been terraformed. We didn’t get a chance to see Oliver Cromwell’s house, because we had to get in line very early to see Neil Gaiman. 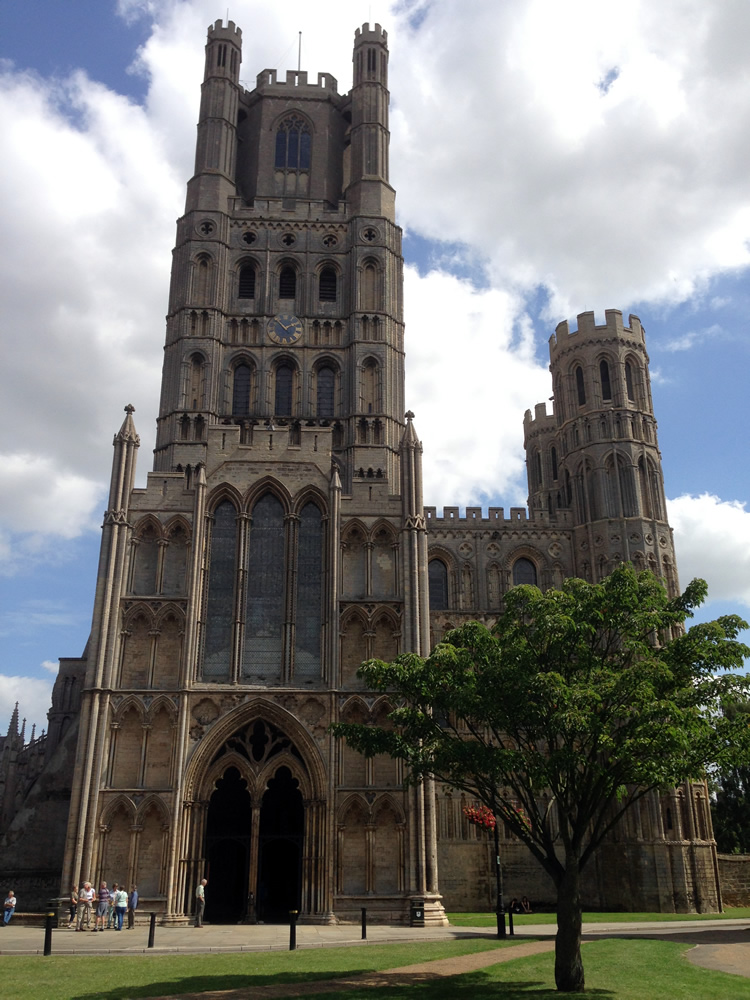 We did have a chance to look around Ely Cathedral. This is the kind of Cathedral you might read about in a fantasy novel and dismiss as being unrealistically big. Apparently they traded eels for the stone to build it! Founded by Saint Etheldreda (Æthelthryth) in 693, the Cathedral and our Ethel both have a rich history. The Cathedral has been restored multiple times and was notably ransacked during King Henry’s dissolution. Check it out. There’s bats in there, which is fun, plus the incredibly chilled-out looking tomb of Bishop Peter Gunning and the hilarious (sorry Christos) carving of Jesus popping his head out of Heaven. That’s actually in the incredibly ornate octagon tower, one of the wonders of the medieval world, so perhaps I should scoffeth not. 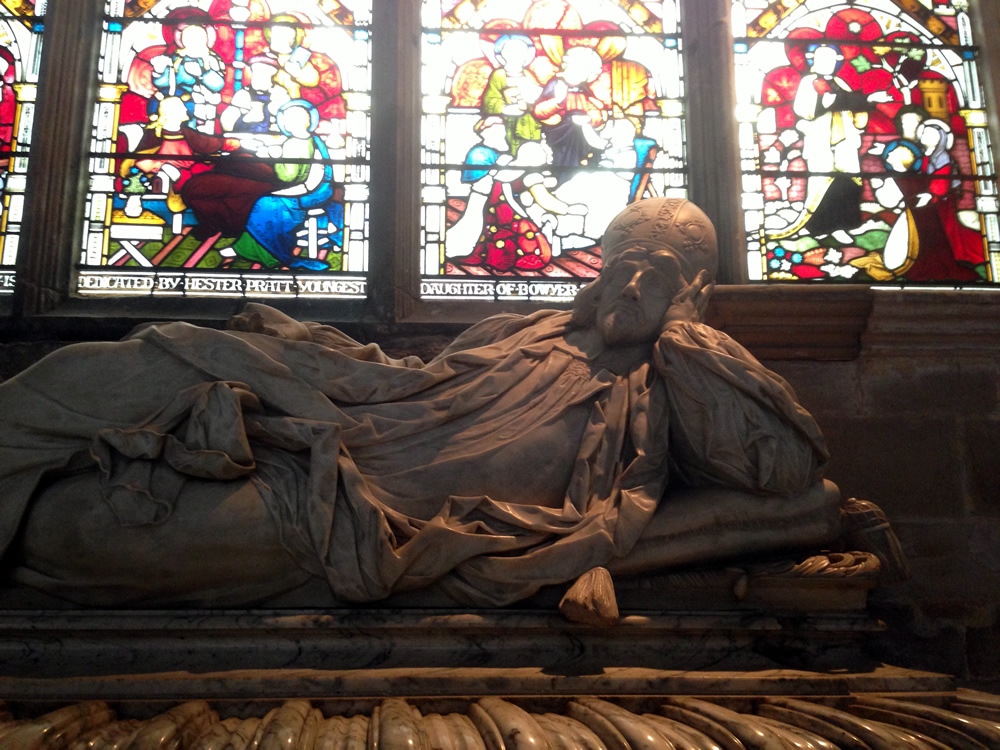 This was a wonderfully atmospheric and majestic setting for Neil’s talk. The mop-topped one gave us readings from The Ocean at the End of the Lane and his forthcoming children’s book Fortunately, the Milk. His narrative skill is impeccable, something touched upon during his question and answer segment. Seeing your favourite author live, reading and talking about his passions is really remarkable. He’s also very funny, it must be said. He’s a great orator and a fascinating bloke (as if that couldn’t be divined from his creations). He had a wealth of anecdotes about messing up his children with scary stories! I wish I could recount some.

There was a butt-ton of waiting, but we didn’t mind at all. The fact is that the waiting was due to the volume of people and the fact that Neil made time to see each and every one personally and have a brief exchange, as well as signing several things per person. I know, cool or what? It should be said also that the Toppings book company who organised the signing were excellent.

We were pretty nervous about talking to him (I didn’t realise that I had a ‘fanboy’ side to me- I don’t normally care about celebrities, but then most celebrities don’t inspire my calling in life). He drew a bat-cat in Becki’s copy of Ocean (as funny as it sounds) and in my American Gods he gave me some terribly deep and important advice: ‘WRITE!’ 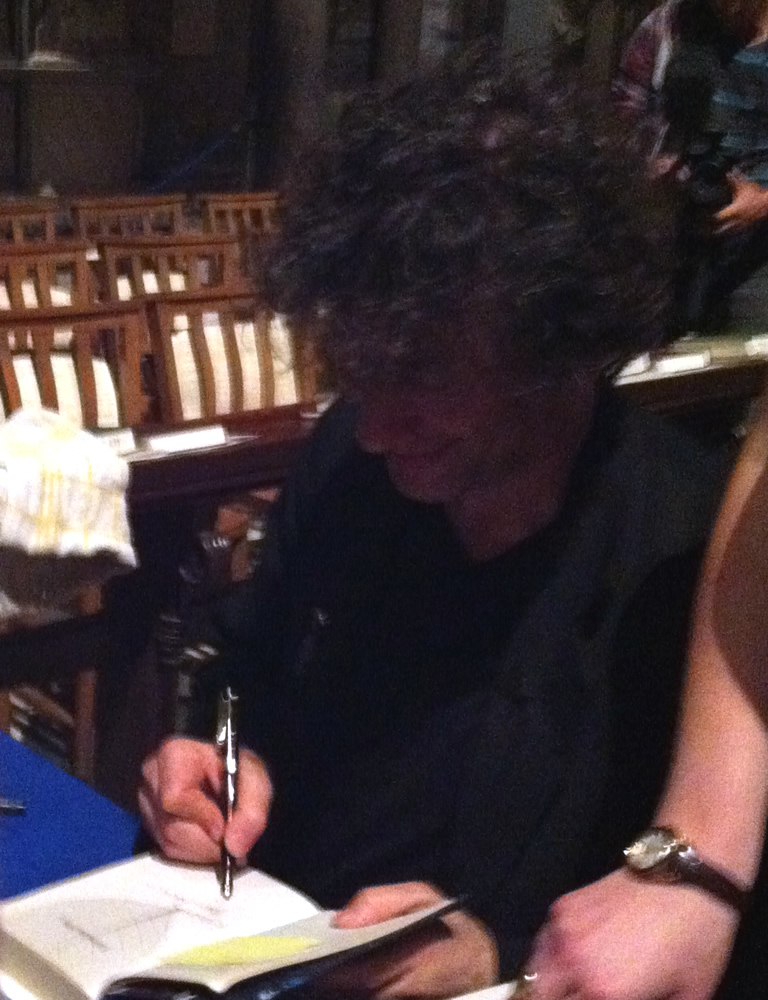 This is because we were asked to put down some hint as to what we wanted on our dedications. Mine mentioned writing, so he asked if I was a writer and I took the opportunity to remind him of the time that he read British Gods after I mentioned it to him via Twitter. He remembered and asked to shake my hand, which was really cool. I can but hope that by some arcane osmosis, I absorbed a sliver of his genius. Hopefully when Splinters is finally brought to life, a lot more people will see British Gods and be pleased.

So, we came away with some great memories of a posh, beautiful, bicycle and Gap Yah infested city, a cathedral big enough to strike the fear of God into the most stoic of eels and a magical night hearing the words of a master wordsmith.