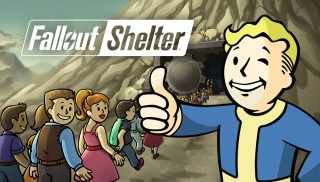 I’m a little behind the times here, but I wanted to post a quick review of a mobile game I’ve been playing lately.

Until I downloaded Sorcery! (whole other story, fantastic game) I was pretty engrossed in Fallout Shelter; the promotional tie-in to Fallout 4.

The gist is that you take on the role of Overseer and look after a vault of post-nuclear survivors. The art style of the game perfectly captures the tongue-in-cheek vibe of Fallout, based on the art seen in the menus of the first (and subsequent) games. The sound supports it nicely with little daytime TV style riffs.

Edit: the game has just been updated, so I’ll tell you about those updates at the end.

There’s a fantastic nuclear-family style to it all, with cheerful chaps and ladies strolling around the vault armed with a powerful work ethic and can-do attitude. This is, of course, Fallout’s iconic juxtaposition to the realities of survival. The vaults are an off-key time capsule. 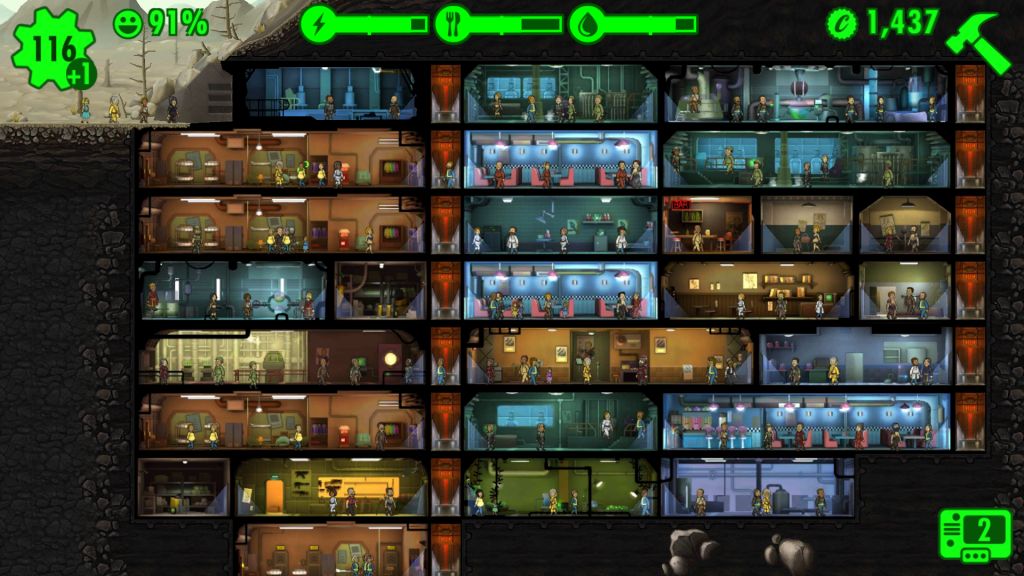 Fallout Shelter is a game of building and management. You assign dwellers to rooms based on their skills (the familiar SPECIAL scale), keeping an eye on their happiness. You have food, power and electric rooms, plus residences, training rooms and so on. When you need a room to produce more, you can ‘rush’ it to get an instant reward, with a risk of failure. Failure usually means radroach attack or a fire. You need caps to pay for things and generate those by levelling up dwellers and rushing rooms. The typical mobile game economy becomes clear, with the option of paying to accelerate matters. 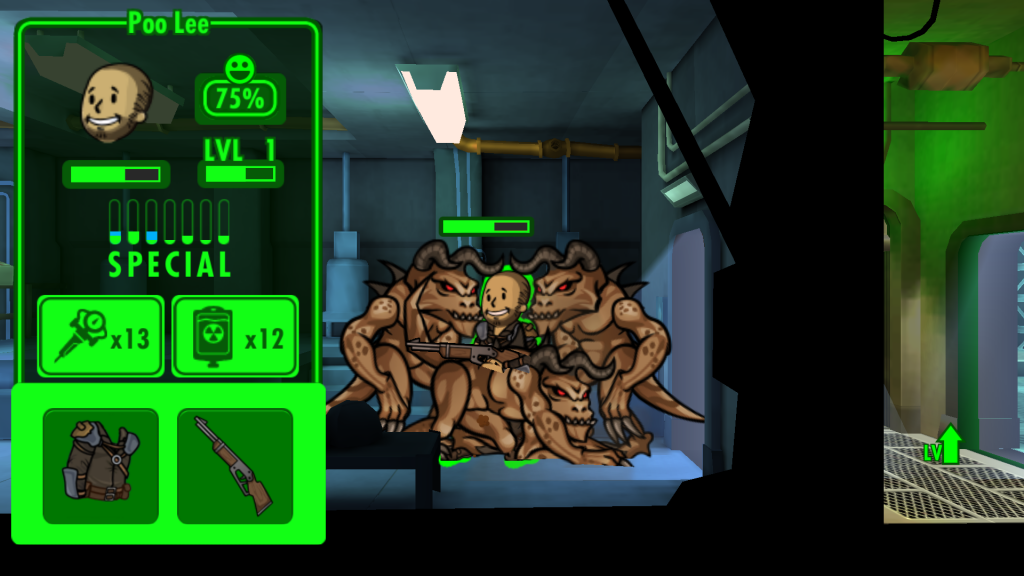 Poo Lee taking on the Deathclaws! Not sure what the one in front is doing.

The charm of FS is that your dwellers develop personality, with outfits, weapons and their general travails. They’ll do things like consistently survive foraging trips in the wasteland, or battle fires fearlessly… or always be sad unless you put them in a room with a member of the opposite sex. They start to gain character as you watch them go through these little things. 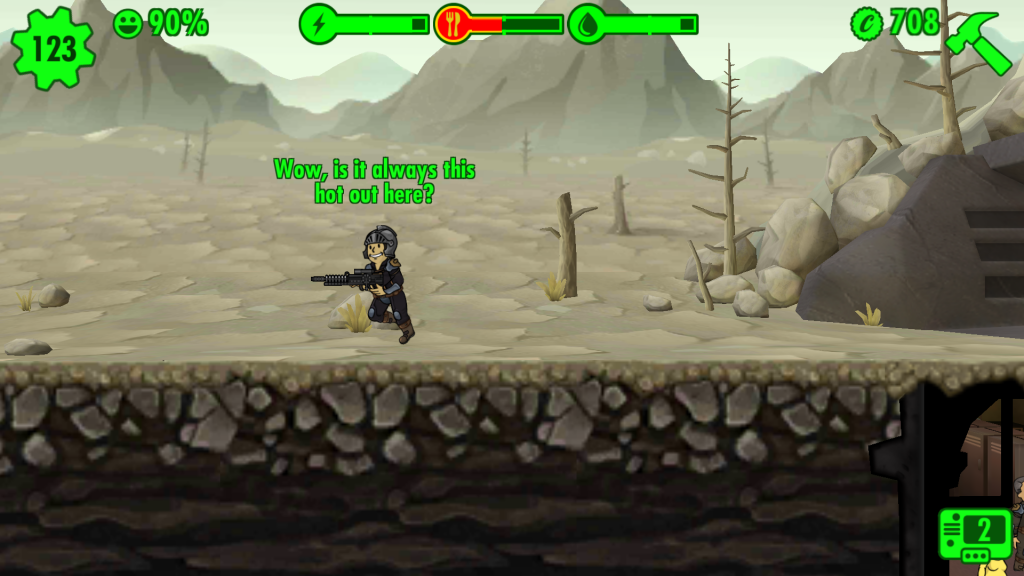 This chap was a special character from a lunchbox. He’s called Carl Lee and he’s nails.

This leads me to explaining the screenshots. Around 80% of my enjoyment of FS was naming the new dwellers as they were born. The game gives you a pre-generated name, but you can alter it. I generally opted to keep the surnames the same and choose forenames.

This rapidly spiralled out of control as I got bored with thinking up names. They soon became random key presses, words created by Android’s auto-text and swear words. May I share some of my favourites?

Jon Snow (Who died! And came back…)

What You Lee (My personal favourite. I so need to call my child What You!) 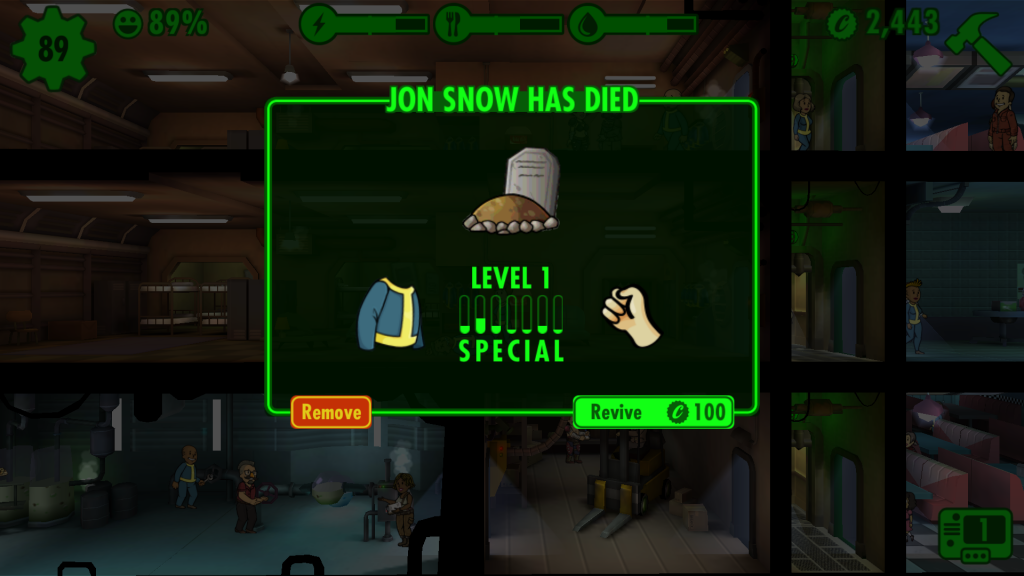 So… yeah. Maybe they didn’t warrant being typed out. Maybe nobody else will be tickled by them. But seeing these names each time I loaded the game always brought a smile to my face, because I’m sad like that. Twat Pratt was a total legend when it came to exploring the wastes; he always came back with top gear.

I think my point is that gamers still know how to make their own fun.

But wait! A few days after posting, an update was made to Fallout Shelter. Here’s the skinny:

Thanks to Vault-Tec, a new mode, extra tools and new features have been added to protect and perfect your Vault including:

Sounds good to me. It’s nice to see the Mysterious Stranger make an appearance!

Fallout Shelter is available on Google Play, iTunes, etc, whatever.