Getting Beaten by The Lord of the Rings: The Card Game

Yes, I’ve been tempted into dark ways by my girlfriend, who bought me a copy of the LOTR LCG for my birthday. I’ve been quiet this week, so thought I’d post about this game just to share how good it is!

What strikes me about this game, right off the bat, is that it isn’t the card game of the movie. The game’s core scenarios revolve around the Mirkwood, actually, and elements from all of Middle Earth are present (such as characters from the Hobbit). The expansions, I notice, cover everything else and more.

I’m not big on card and board games, so I approached this as a relative newbie. The rules are a bit complex, but after some fumbling, we got there (lulz). You have a deck of events, allies and attachments (ie a rallying cry, a Gondor spearman and a Cool Sword) and three heroes. Against these, the game pits a series of evil locations and beasts. 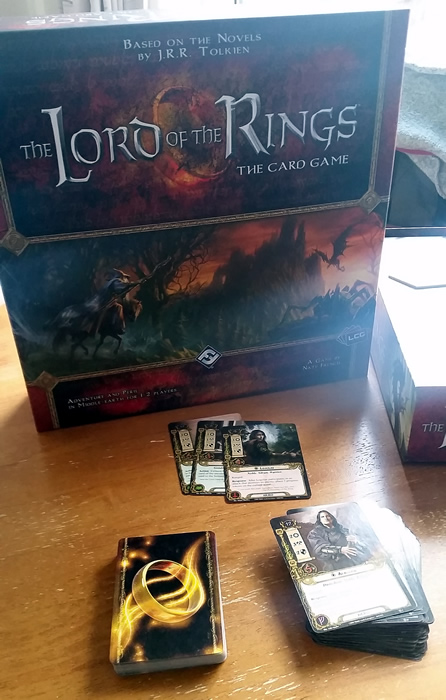 This game, man… fuck Dark Souls, this is hard. Maybe I’m just too new at it, but I find it very challenging to balance fighting the enemy with completing the overarcing quest, while also being hammered by random shit like Sauron damaging all your men at once. In this challenge, however, lies a rewarding and engaging game. I’m told that LCGs are usually competitive, so building your own perfect deck may seem daft for co-op, but I’ve already enjoyed tailoring mine to defeat these core scenarios. I’m now rocking a spirit-based deck with a side order of tactics, via Legolas and his awesome special ability.

So yeah, I just wanted to shout out to Fantasy Flight games and Nate French, the game designer, along with all the artists who’ve contributed great scenes. This is an ace game and I’ll be playing it a lot more. Now, I’m off to watch the movies and play Shadow of Mordor.

See you next week!