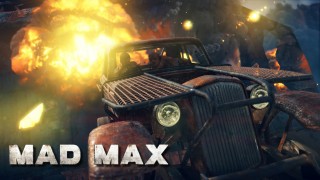 The verdict? Like the new movie, this game is nothing special and a little underwhelming, but far better than expected. I feel harsh in saying that, because there’s nothing wrong with this game- it just isn’t anything new. That being said, if you just want a bit of fun without being bombarded with gimmicks, you’re golden. Sometimes it’s nice to trim out the ‘innovative’ new systems and control styles and graphical jiggery-pokery. Mad Max himself would approve- barebones and muddy thrills are the order of the day. 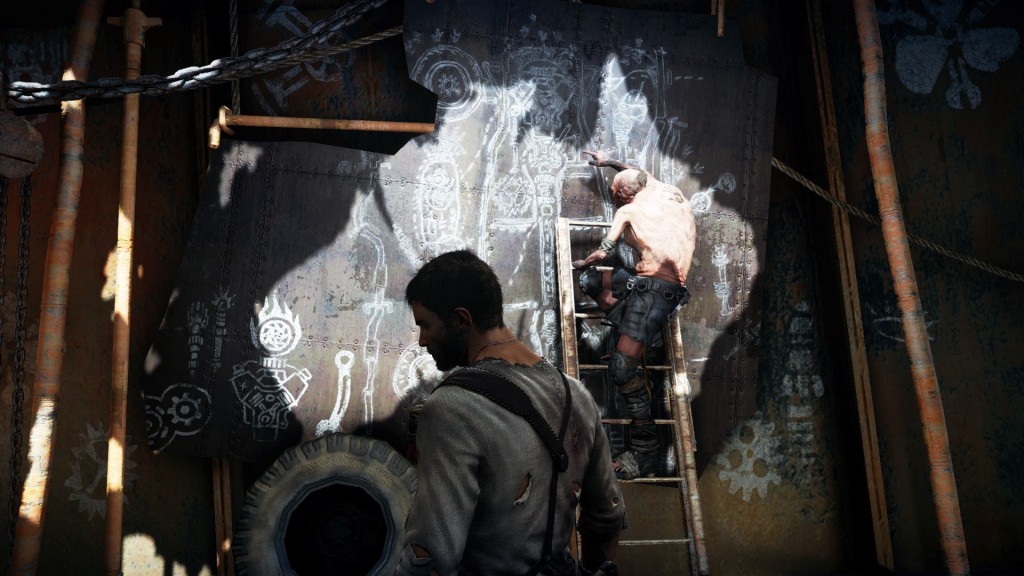 We start out with a cinematic video intro, featuring a great voiceover about the end of the world. This is very much akin to Mad Max 2, which is definitely the part of the franchise that this game and Fury Road are both trying to emulate. We see images of war and oil and we’re told that most people died. Most, I tell you, most! That’s far worse than some. Without a doubt, the movie tie-in force is strong in this game, with terminology like Blackfinger and Guzzoline finding their way into the script.

So, in this world gone mad where petrol is a scarce resource but the survivors bizarrely build everything around it, we see our Max in his search for peace. The voiceover insists that his grief is driving him mad, but just as with Fury Road, we don’t see much evidence of it. If anything, the world is mad and Max plays the straight man, reacting stoically and with impressive cool. This game should be called Mild Max, because aside from a bit of the old ultraviolence, he’s the sanest bugger in the desert. 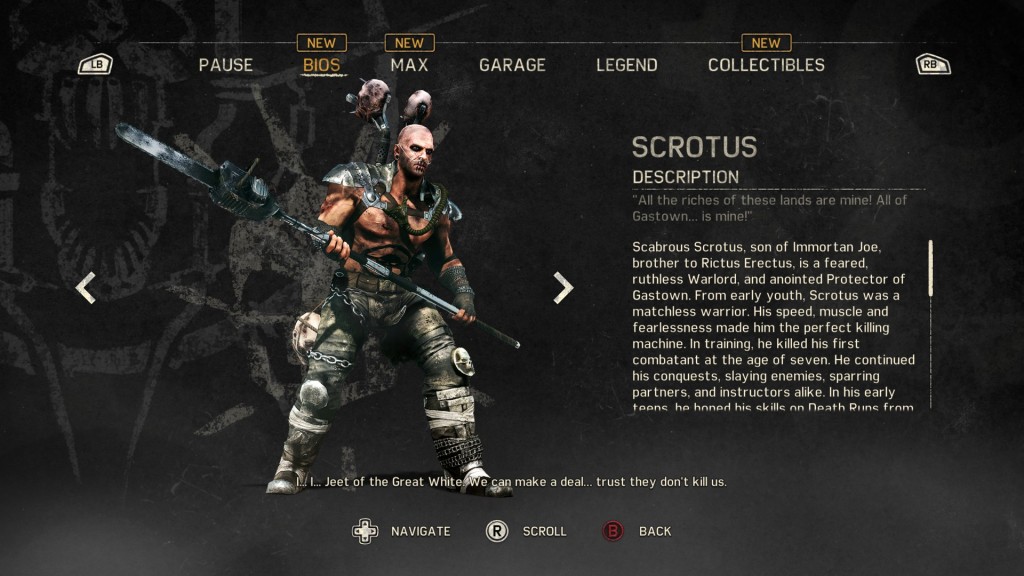 Well, in fairness, it’s the franchise that gave us Lord Humungus.

Compare Max to his new nemesis: Scabrous Scrotus, an armour-clad behemoth who spouts wild rhetoric while swinging a chainsaw on a pole. Yes, like the movie, this game is essentially Gorkamorka without the Orks (look it up) – silly cars, crazy weapons, impractical armour, mechanics everywhere and skulls everywhere else. Scrotus (sigh) even leads a horde of pale War Boys; a look in the glossary reveals that he’s a son of Immortan Joe from Fury Road, so this all fits nicely with the new canon. Nevertheless, Mad Max is starting to look like Normal Max compared to this nutter.

But wait! There’s an angry doggy in the intro movie. Will Max kill it, in a mad fashion? No, Scrotus actually knees his own dog (yes, knees) and so Max befriends the wounded canine, Fallout-style. Mad Max starts to look like Remarkably Reasonable Max. 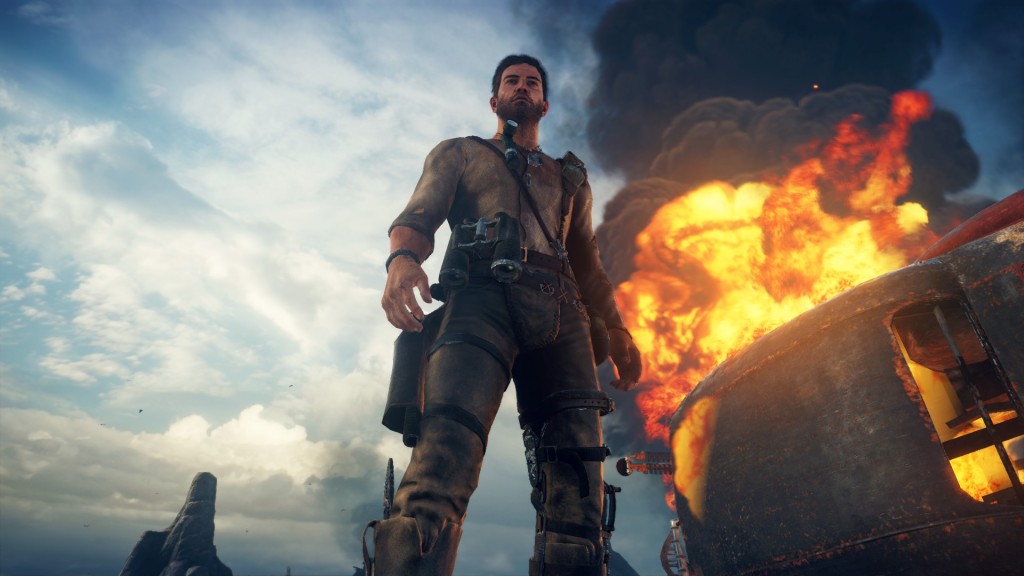 The game now begins in earnest, with a seguetastic voiceover by an Australian narrator. It’s a nice touch and goes a long way to make you feel like you’re playing the movie. Max Rockatansky’s voice actor is Bren Foster, of the same Antipodean persuasion, adding some authenticity. I don’t think anyone will miss Tom Hardy’s voice or likeness in this game. It’s not like he was integral to the movie. Graphically this game is simple, but quite effective. The wasteland looks stark and pale, with large set pieces such as rusted tankers. Characters and textures are as detailed as they need to be.

The game’s mechanics revolve around fisticuffs in a similar style to the Arkham games, some hip-shooting and the obvious vehicle combat which also feels similar to Arkham. Close combat is about timing parries and building up a rage meter for doing more hurty when makey punchy. The shooting controls are a little odd (my shotgun kept going off prematurely… yeah, yeah) but I don’t think it matters; it’s meant to feel secondary. Fights become increasingly complex with knife characters who can’t be parried in the usual way (see Arkham) and special characters who buff the rest. The fact that the game actually uses the term ‘buff’ makes me a little queasy, but I get that it’s a common game term these days. These buffers are manic musicians who stir up a frenzy in the other warriors, just like the guitar playing nutter in Fury Road. 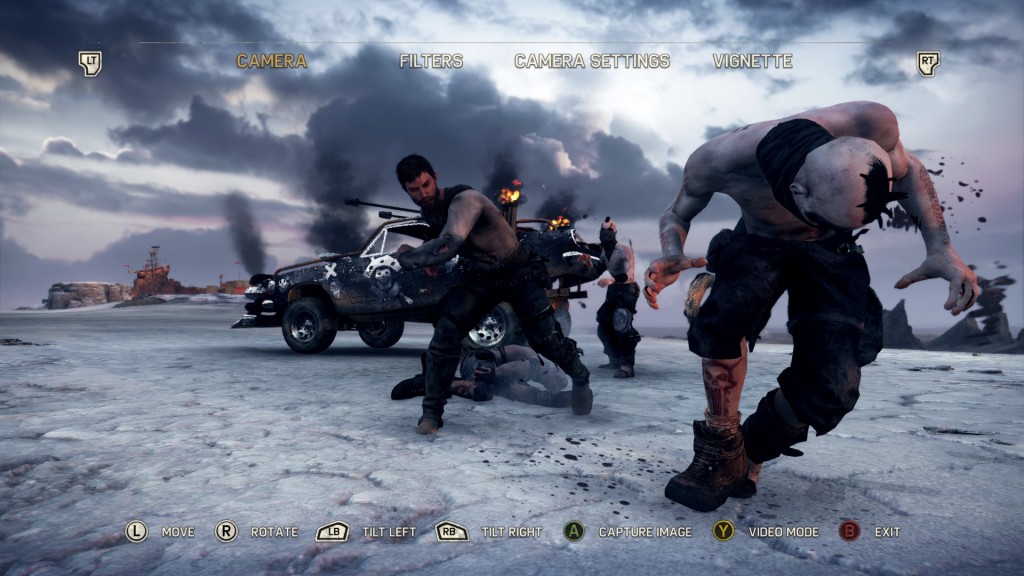 Max can heal himself by filling a canteen of water from sources in the game, which feels right; it adds to the desert vibe in a game that sorely needs a shot of realism for balance. The same mechanic applies to filling your car with fuel. You can store a secondary fuel can in the car for convenience, or to use as a weapon.

Yes, the car. The infamous Interceptor is gone, captured for scrap by Scrotus and company. I imagine Max will get it back in time, but for now he sets out to build a new car with the help of Chumbucket. Chumbucket is a mechanic who befriends Friendly Max and goes on to witter a pile of quasi-religious twaddle every five minutes. You’re already familiar with this kind of comedy sidekick, who becomes irritating after the first mission. Chummy offers to build Max a new car; the aptly named Magnum Opus. This is actually a cool idea, as you get some choice in how the car develops. Therefore you search around looking for parts to add to the car and slowly get invested in Max’s trials and tribulations. The first aspect of this is getting a body for the car from a junk graveyard, representing a big choice in the car’s appearance. I must say, I liked this a lot. Building the car, upgrading it, racing around the desert to do battle with crazed warriors… all classic stuff. Not grown up or sensible, but fun. I’ll admit it: I’m coming round to this game. 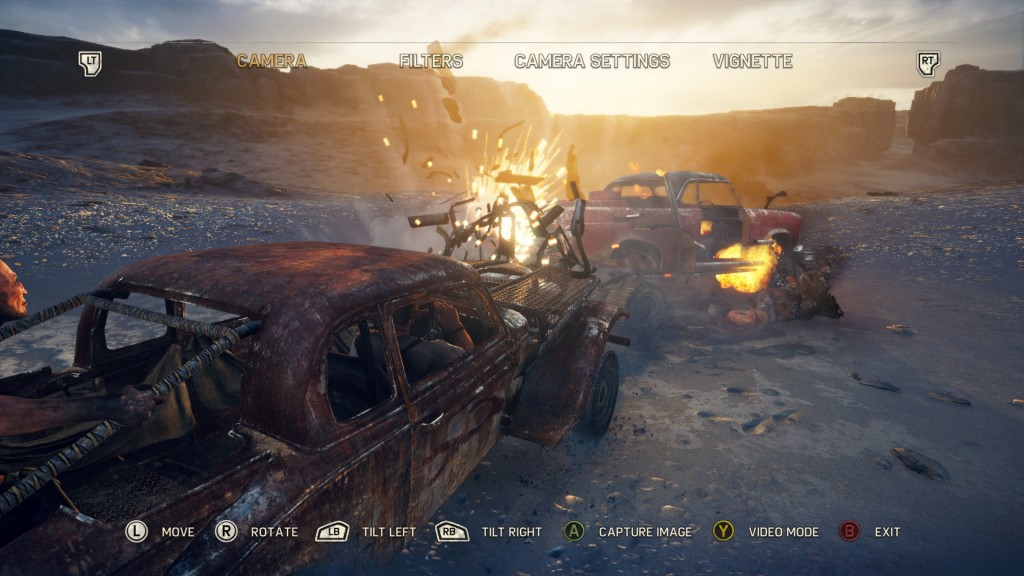 The Magnum Opus, getting ram-bunctious. Can you tell I had fun with the screen capture mode?

The game is built around a rough sandbox, insofar as you can explore the world in your car and choose to loot areas for scrap or take on story missions. This is heavily reminiscent of Rage and Red Faction: Guerilla. Scrap is used to upgrade the car with new weapons, such as the harpoon, which is used to pull stuff off of other stuff, as per Just Cause. You also use scrap to modify Max’s appearance, which is a little odd but fine. Can’t wait to get him the classic one-armed jacket.

Overall, this game rises above the usual pitfalls of tie-ins. It isn’t genre defining or innovative and it feels a little ‘five years ago’, but who cares? So long as you don’t mind the kind of game where you’re expected to explore and complete side quests while loads of nutters blather on at you about petrol, you’ll enjoy it. 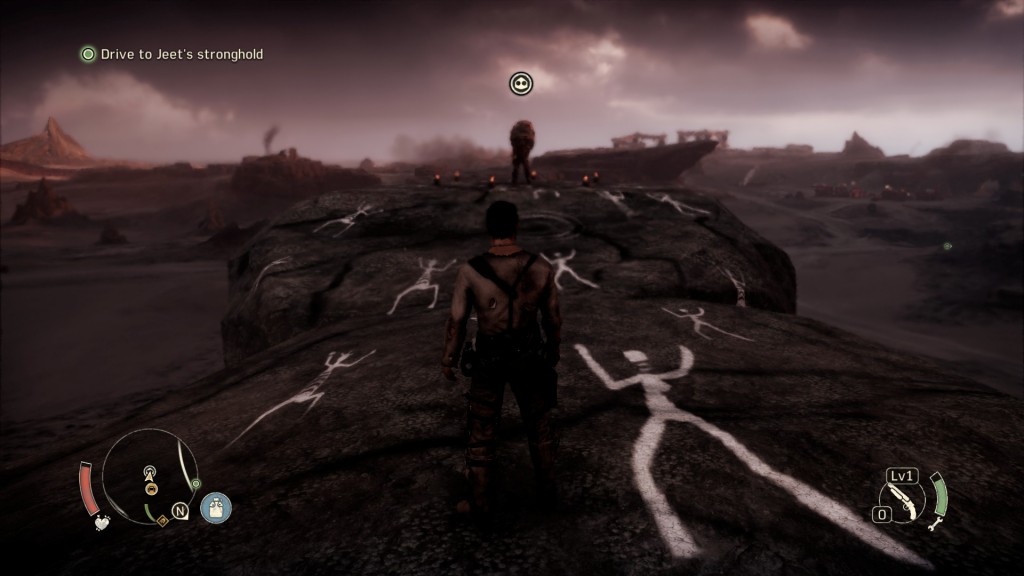 The cinematic narration might annoy some people but I feel it’s the right choice for this genre; you get a Mad Max game because you want a hint of the films. That’s reinforced by the fact that the game’s plot doesn’t directly recount the plot of the film; it’s more like a bonus chapter.

Who knows, Max might even get a bit mad.