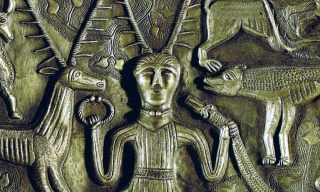 Having a little look at Torc.

Hello all! High time I returned to my Strange Spotlight series and did episode 2, which will take a look at Torc.

Returning visitors to Doing Words will know that I wrote a collection of short fantasy tales, called Strange Matters. The eBook’s available from Amazon, Smashwords, Google Play and more, with the hardcopy on Amazon. Strange Matters contains 20 pieces of fiction and poetry that all contain a glimmer of magic; for some it’s overt, for others it’s subtle. Some are high fantasy, some are modern.

Torc is one of the originals, a short tale which grew entirely out of the word ‘torc’ and it’s alternate spelling, ‘torque’. Though ‘torc’ is derived from ‘torque’ (latin, meaning ‘twist’), the former spelling is the European/Celtic version and is more common now when referring to torcs as an ancient neck ring. The latter spelling is now used mostly in physics and particularly to describe the power of engines (referring to rotational force).

So, a torc is a neck ring made of metal, typically fashioned by twisting (hence the name). Torcs were worn by warriors to demonstrate their prowess and success, but also, especially in the case of the Celts, by kings, chieftains and gods. The deity Cernunnos in particular wore torcs, usually one around his neck and two in his hands or antlers. I say usually, but there are few images of him remaining. Torque in engines refers to rotational force and is one way of measuring the power of an engine. Less interesting unless you know about things that go ‘brummm’.

Long story short, the idea for the story grew from torc as in jewellery vs torque as in motorbikes. Pretty basic, huh? That’s why this story is about a bunch of bikers being confronted with a kind of spirit quest or trial from the ancient world. Spoiler alert. Now, I’ve simplified matters for the sake of the short story. The torcs are primarily represented as a symbol of kingship or victory. The reason becomes apparent in the tale. Cernunnos, meanwhile, has been greatly adjusted by poetic license. The Horned God as his name translates, is a figure associated with magic, rituals, virility and coming of age. I’ve conflated him somewhat with folk figures like Herne the Hunter and your typical primitive predatory force of nature. You’ll see when you read it, that the result is a big bad antlered dude who has it in for our poor bikers, but also symbolically represents a trial, an agent of the cyclical nature of life and death, a crucible for the forging of manhood.

Our bikers are part of the fictional Black Hounds, named for the Irish boogeydog. They are Daniel, Conri and Ade. Conri, by the by, means Wolf King in Irish Gaelic (sources vary, but that’s where I was going with it). Daniel is our protagonist, taking a break from the rigours of being a back-patch biker to have a weekend in the woods with his club-mates. All credit must go to my biker friends for the insights into bike club structure and style, which I have admittedly simplified and modified for the purpose of this story (though as you will see, the Black Hounds are not a typical club).

There’s no more to tell without spoiling, since this is a short tale, but I would like to say that the Uragh lake, woods and stone circle are real! Below is a picture of them looking ominous, ancient and lovely.

Hope you enjoy or enjoyed the tale! It’s not your typically structured story (I know, I do that sometimes) but I do like to leave ‘em wanting more. If you haven’t read it yet, use the links at the top of the page to grab your copy of Strange Matters!