Kate called to the youth:

She repeated the question after a few seconds of silence, but heard no response. She edged closer to the fence and the youth did the same, creeping out of the shadows.

She made to leave, but the youth’s next shuffling step brought him into the streetlight. He was crouched, moving hesitantly, his eyes fearful and round. He was very dark of skin and had closely cropped curly hair. He was topless, despite the cold, and wore ill-fitting jogging bottoms. He had nothing on his feet. Curling his fingers through the fence, he stood to his full height. She took a step back, realising that he was almost six feet tall and had a thick, muscled frame. 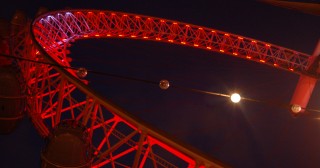 Based on votes here and on my blog, our heroine will be Kate ‘Karma’ Glover. Welcome to…

Kate cursed under her breath as the bus she was pursuing pulled away, the driver ignorant to her embarrassed half-jog. Yet again, she’d missed the bus home and would have to trudge through the dark streets of London to the nearest tube station. Pulling her hoody tight, she ignored the bite of the autumn breeze and started walking down the small, deserted street.