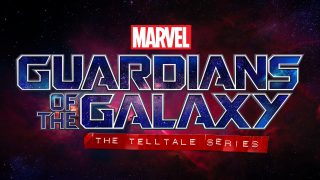 Telltale’s Guardians of the Galaxy Screenshots

Thought I’d share these lovely shots and some cast info.

As a huge fan of narrative and adventure games, I have come to love the Telltale series, from Back to the Future to Batman. You may recall my Gist about Tales from the Borderlands. Some groovy information has come out recently about Telltale’s Guardians of the Galaxy, based of course on the popular movie.

This is a movie by which I was pleasantly surprised, having some of that innocent Star Wars adventure to it, with genuine humour and interesting characters. Yes, there are lots of annoying Americans In Space bits, but by and large I was drawn in and I’m looking forward to seeing what Telltale do with it. They tend to draw out all the best aspects of a setting.

In their own words:

Marvel’s Guardians of the Galaxy: The Telltale Series is a brand-new story of the universe’s unlikeliest heroes: Star-Lord, Gamora, Drax, Rocket, and Groot. In the wake of an epic battle, the Guardians discover an artifact of unspeakable power. Each of them has a reason to desire this relic, as does a ruthless enemy who is the last of her kind, and who will stop at nothing to tear it from their hands.

From Earth to the Milano to Knowhere and beyond, and set to the beat of awesome music, you wear the rocket-powered boots of Star-Lord in an original Guardians adventure, where your decisions and actions drive the story you experience.

The series will feature a star-studded cast of voice talent, including Scott Porter (Friday Night Lights, The Walking Dead: The Telltale Series) as Star-Lord, Emily O’Brien (The Young and the Restless, Middle Earth: Shadow of Mordor) as Gamora, Nolan North (the Uncharted series, Pretty Little Liars) as Rocket, Brandon Paul Eells (Watch Dogs) as Drax, and Adam Harrington (The Wolf Among Us, League of Legends) as Groot. 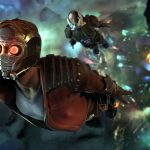 The void of space aint no thang 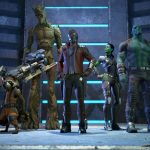 Taking cues from the comics as much as the movie, it seems here 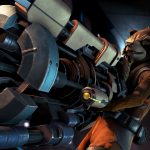 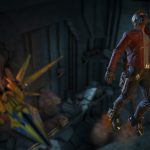 Jet boots for much explore