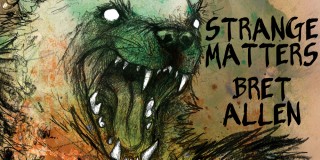 Something strange this way comes. My short story collection, mentioned so many times in so many little asides, is finished at last!

Yes, really! Now entitled ‘Strange Matters’, twenty of my stories and poems are all in one place and ready to be read. You can see a teaser of the cover above. 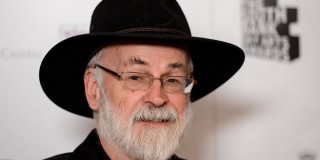 Today we mourn the passing of Sir Terry Pratchett.

I’m profoundly sad that Sir Terry has passed on to that unknown place, but I realised quickly that I wasn’t devastated. I was more upset to hear of his Alzheimer’s diagnosis, which is anathema to a writer. Death, for a man of such will and wisdom, is just another full stop out of many.

I think I’d rather celebrate a life which, despite disease, is astoundingly successful. His writing is prolific, insightful and inspiring. He creates laughter, provokes discussion and promotes a healthy desire to ask questions. Pointy questions that upset people.

I grew up with Discworld. I devoured those books as a child (I used to enjoy being ill, because Mum would buy me a Discworld book to sit and read on the sofa), because they were extremely funny and had dragons and wizards and gruesome bits. As time went on, I came to cherish the sharp wit and social commentary hidden between the lines. Art holds a mirror to reality; Terry Pratchett smashes a mirror over reality’s head and runs away. Buried in fantasy books about homespun witches, hapless coppers, clueless heroes and mad cities is all you could ever want to learn about how the world really works. Masked in parody and humour is a treasure trove of insight into real magic, real life and real truth.

I cannot thank Sir Terry enough for inspiring me to write, to think and to push back when the world pushes me, all while laughing at the wonderful madness of the everyday.

Death came for Sir Terry today and I like to think he came as a friend.

‘It is often said that before you die your life passes before your eyes. It is in fact true. It’s called living.’

I had the pleasure of reviewing a book this last month. Let me share my experience!

‘Garrett’s Mulligan’ by Grant Reed is a fantasy tale with a comedic slant and a murder/intrigue plot. I was recommended it by a friend and it’s just that kind of recommendation that keeps us finding new gems that would otherwise have passed us by.